After some healthy discussion on Google+ we have come to realize that, while release dates are detrimental to the overall development process, roadmaps provide a similar level of transparency without the same amount of responsibility. We do not provide release dates because users tend to get upset when we are unable to meet them. On the other hand, scheduled updates give the user a sense of what is to come and an assurance that development has not ceased.

With that said, here is what we have regarding StatusBar+. It began as the custom status bar for ANY Android device, rooted or not, and done WP7-style. As we look to expand our user base we have added support for notifications and improved stability immensely. Now we are turning out attention toward customizations.

The next version of StatusBar+ will be called orchid, continuing with the flower-based version naming seen alongside ChargeBar and The Seven+ Calculator. It will consist mostly of internal improvements and optimizations, but as a number of new features: 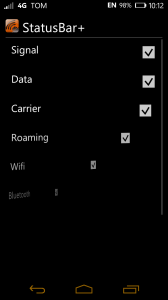 While these may sound great, we did not want to stop there. Users often suggest that we add different themes because they are just not fans of the Windows Phone 7 UI. Sacrificing a few customizations like the ability to set the background & icon color to whatever your heart desires, we look to add support for third-party themes in an upcoming release. This will give the theme control over what images to use for what indicators as well as their positions and styles. An API based on the AOSP SystemUI code would allow ROM status bar themes to be easily ported as APKs and installed on the user’s device. They would be given a list of all installed applications and after a quick restart of the app, be able to change the theme of their status bar on-the-fly.

Thanks again for your support and we look forward to hearing your suggestions!