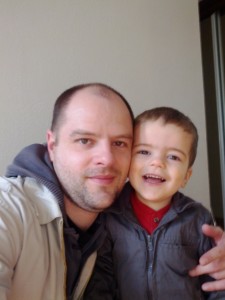 Johan Jaworski and his son

As we expand our offerings we are always looking for good translators who are willing to work with us to localize our applications as best possible. Recently our applications have benefited from improved French translations courtesy of Johan Jaworski. He has truly been a great help to our team as he is always willing to translate and improve on his translations with each update. He even learned XML so that he could more easily interact with developers.

A self-proclaimed babysitter and proud father, one would wonder where Johan gets the time to do what he does. Simply put, we don’t know, but we are certain that our French users are glad that he does. Currently ChargeBar and StatusBar+ have benefited from his work, but look forward to updates soon on all of our applications with improved French localization.

This has been a brief glance into the personal side of The Seven+ Project. If you are fluent in two or more languages including English and, like Johan, willing to take the time to localize our applications into your native language drop us an email. While our current size does not allow us to offer much in terms of monetary compensation we make sure to give credit where credit is due.

We would first like to take the time to say thank you to our partner, The Android Galaxy, for taking the time to so carefully review our apps. For new users interested but skeptical in what we have to offer we highly recommend that you read their comprehensive reviews. There are currently featured reviews for ZPlayer, StatusBar+, ChargeBar, the Seven+ Calculator, and Launcher7 with more on the way soon. Again, we are glad to be partnering with such a great organization and hope that they will be of assistance to prospective users.

It has been over a year since the initial release of some of our projects, well over half a year since our inception, and yet admittedly we seem to have run into an issue. We have over half a dozen applications with more on the way and updates to our current applications, and yet the just do not play as nice with one another as they could. That is why we are re-working the framework behind some of our applications to allow them to better communicate with one another, without compromising security or efficiency. Be on the look out for updates to all of your favorite applications and see how they integrate with one another. Whether you are opening a Dialog box in one application or the Accent color chooser in another, everything in the system should just work well together. Now if only that logic applied to people as much as it did apps! 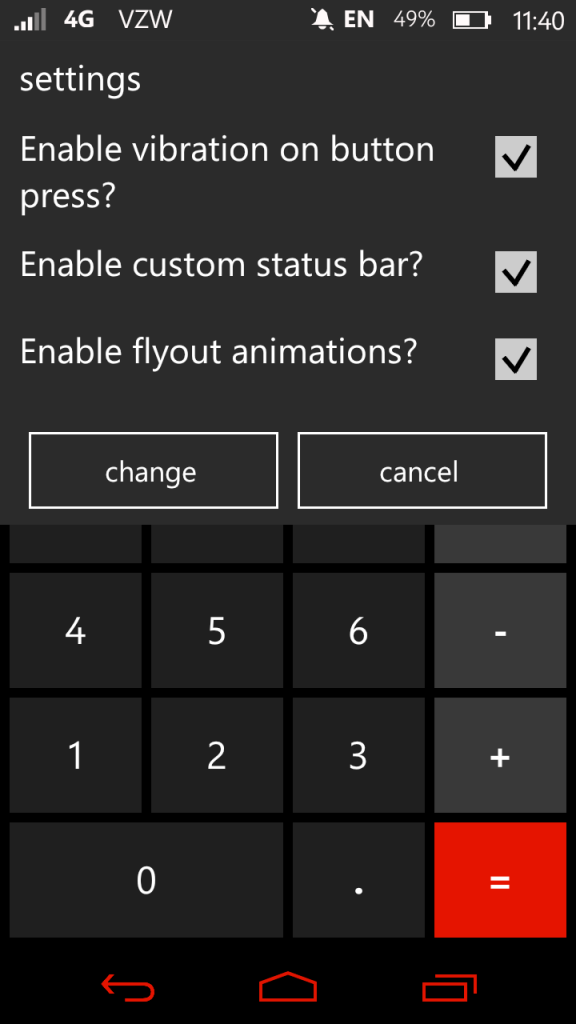 It has been a while since The Seven+ Calculator has been updated. Today we have revisited this simple application with the latest build dubbed Mahalo which adds support for Android 4.0 ICS, cut-copy-paste, overscrolling, an updated status bar, Android Beam, and more! 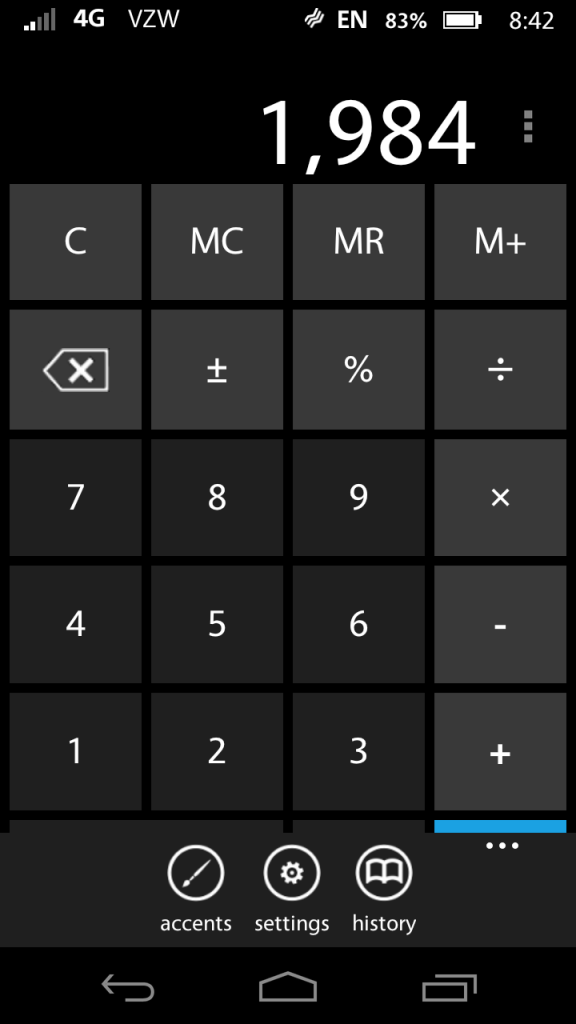 It has been over half a year since The Seven+ Project began, and the results are truly overwhelming. As with anything our mission and our actions change over time. At our inception we envisioned something simple to imagine, but difficult to implement: the openness of Android with the user experience of Windows Phone 7. However, as our work progressed we came to the realization that what we were doing was about something more: pushing the boundaries.

In a sense our mission has gone from narrow to broad, but in a sense our focus has shifted. When we work to create the products that we do in the back of our minds is this notion that what we are doing has never been done before, and could quite possibly lead to bigger things. Take StatusBar+ for example, it was the first custom status bar. Since its release it was made open source, and almost immediately after its source code would contribute to the creation of another, even more unimaginably popular application, Super Status Bar. It serves as an example for developers looking into making applications that similarly push the limits of people’s imaginations who would have never though such an app possible.

Even the two oldest applications that are part of The Seven+ Project, Launcher7 and ZPlayer, have undergone transformations. They have included customizations far beyond the scope of Windows Phone 7, and allow users to truly make their experience their own. They exist today as two of the best applications for what they do, and their reviews speak for themselves. With the release of ChargeBar we hope to hit this point home, but no longer is The Seven+ Project solely synonymous with WP7. Instead, we are a cooperative venture of like-minded individuals interested in showcasing our talent and dropping jaws, showing the true potential of Android. The reaction to our work has been overwhelmingly positive, and we have our users to thank.

This is just a quick announcement that we are proud to be partnering with The Android Galaxy, an excellent website for discovering all of the latest and great new, high-quality Android applications! Their website is simple yet effective at providing reviews on numerous Android applications, and in the upcoming days this list will include our applications as well. They have sections for games, tablets, and even developers interested in learning the latest entanglements with the Android SDK. So do check out their website and check back in with us as we make way for another great collaboration. 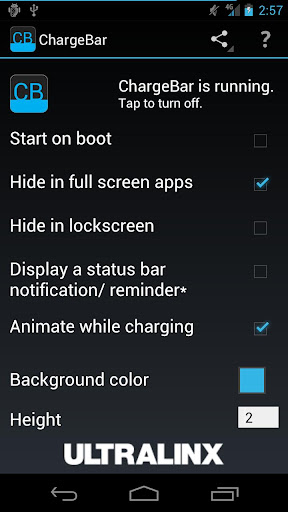 Today marks the initial release of ChargeBar, the MIUI battery bar application for any Android device running any ROM! Unlike its competitors it features the ability to change the bar into any color, automatically hide for full screen apps (like watching videos on YouTube), animation while charging, and more! What’s more? It is completely free!

At the bottom of the application is a permanent graphical link to supporting organizations including The UltraLinx and UltraUI. For those who wish to support development or remove these graphics there is a donation option. We hope that those who can will consider donating when possible.

As we said, it is completely free so for those without access to the Android Market the APK file will be made available here. Of course for automatic updating and the ability to donate we encourage that everyone download it via the Android Market when possible. Don’t forget to check out the project post as well. So please, give ChargeBar a shot and let us know what you think!

If you are browsing around CNET’s software listings come check us out, we currently have pages for ZPlayer, StatusBar+, the Seven+ Calculator, ChargeBar, and WP7Lock. Check in later for more listings and let us know what you think.

It has been a while since we have published anything, so I thought that I would take a moment to reflect on user comments left in the Android Market. There is often an area of debate surrounding this topic as developers and users can have different notions of this feature’s purpose. I will try to clarify my position as best I can.

First off, let me begin by saying what the comments section is not: a place to report bugs. Contrary to popular belief (or the belief that many users demonstrate), the comments section is not the optimal location for reporting a bug. Part of the issue is that developers are not permitted to respond to comments, so if the user fails to fully report a bug the developer has no way of knowing what precisely is the issue.

With that said I find that an equally abused aspect of the Android Market comments section is for feature suggestion. Developers work very hard to create applications that are unique and useful, and while we absolutely appreciate knowing how to improve our work its best to tell us directly. Then we can get a clear sense of what it is that needs to be added, discuss the possibility of this option (as not every single suggestion is possible), and work together to test it.

Finally, the single most important issue that I would like to address is actually using and updating comments. I find that far too many users neglect to comment on an app (perhaps because it is good they are not mindful enough to remember, it seems that negative feedback is often the more common form). That given, it is equally important to remember to UPDATE YOUR COMMENT! The absolute most irritating thing for developers in regard to feedback is leaving stale, negative feedback. Negative feedback has its place, but remember to be respectful and if an issue gets fixed please UPDATE YOUR COMMENT! I can not say this enough, but given how hard developers work to not have their rating reflect their effort and the quality of their work is aggravating. It can decrease the likelihood of future downloads, downgrade search results, and more.

I hope that clarifies my position on comments in the Android Market. If you skim read like so many of us digital natives do, here are the key points:

As always thank you for reading and please show your support by mindfully leaving comments, do not fit the stereotype of lazy/ poorly-written Android Commentators (I highly recommend that you read that article as it touches upon many of the ways that poor feedback can be made. Here is my extension to the author’s categorizations:

Trolls (those who provide thoughtless negative feedback. Remember that even if you state your device we as developers do now have every Android device every made, there are over 800 of them and more come out every day):

“Rubbish” – nigel (from StatusBar+)
“Have SE Xperia Mini Pro and it won’t even start. FC every time

IOU (those who feel that the developer is indebted to them to fix an issue):

“Fix scaling for Galaxy Note Pleasd fix for 1280×800 resolution! Great app otherwise, 5 stars if you fix the scaling to higher resolutions…” – Je (from StatusBar+)
“Have SE Xperia Mini Pro and it won’t even start. FC every time

“Fine if you never listen to more than 10 songs in a row. Lowered to one star because constant force close makes it unusable.” – anwar (from ZPlayer)

Got any other examples that you would like to share, or tips for users to be more respectful and observant when commenting? Share with us in the comments section below, but be mindful! 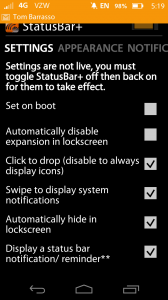 Happy New Years everyone! Our gift to you comes in the form of an update for StatusBar+, which is now in beta. Among the new features includes automatic full-screen detection (no more choosing which applications to auto-hide in), notification support (when StatusBar+ is enabled in Settings > Accessibility), the ability to remove the ongoing notification, an option for rooted users on Gingerbread – Honeycomb that removes the system status bar completely, and an improved user interface featuring new Zune-style pivots.

Remember that while StatusBar+ is no longer in its alpha stage of development, bugs are still likely present. Being as unique of an application as it is, StatusBar+ may not work perfectly on every device. As always if you run into an issue please send us an email stating your device, firmware, and a description of the problem. Leaving comments in the Android Market will not allow us to address the issue.

That is it for now, so thank you to all of our beta testers for providing valuable feedback, and cheers to a New Year, 2012 here we come!